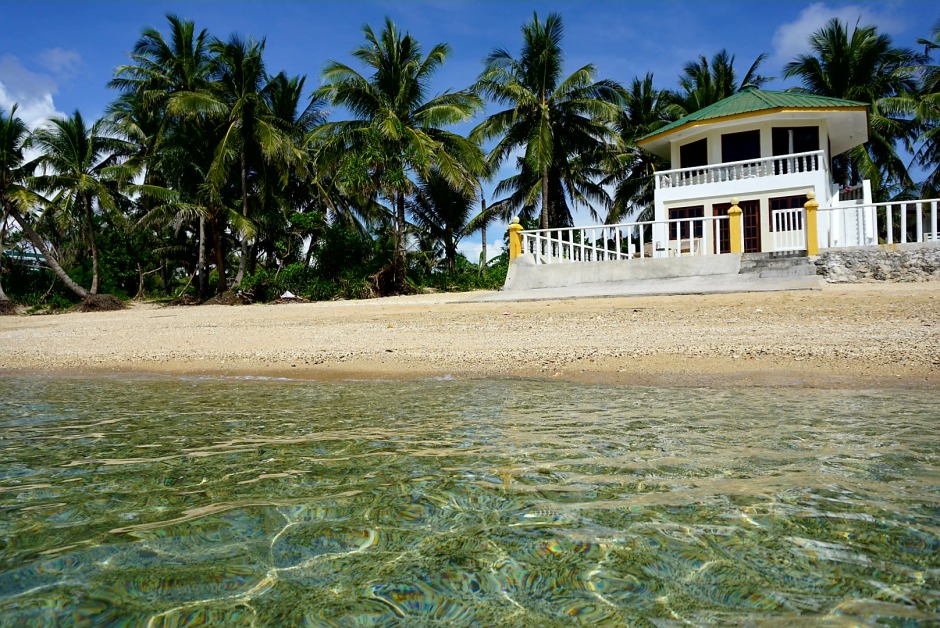 1 Week into Asia and its off to Carabao Island.

This island is near Boracay just across the sea, it is a small island about mid Philippines. It only has a few hotels, electricity is only on between 14:00 until 06:00, no ATM’s, no one takes credit card and the internet is poor. Sounds idyllic and it was!

Prior to setting off Deb and Steve head off to go to the ATM and get some cash. Small problem?
It’s the weekend, Korean and Tiawainese had cleared the ATM out as you can only get 10, 000 PHP at a time, so they use multiple cards to get more, worth remembering should you want cash at the weekend.

Luckily for us the hotel in Bulabog takes PayPal and we still have the Monday morning before the speed boat comes to collect us from station 1. 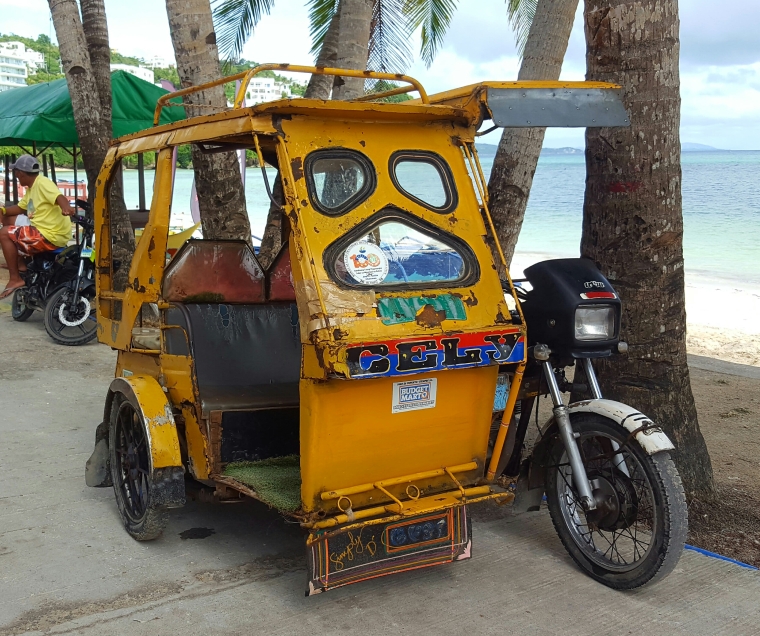 We pack up and grab the 1st tricycle we see then head off to D’Mall to go cash hunting. This was an experience, we head off and then realise he had no tricycle number, the guy couldn’t have had a licence as he was blind but he slowly made his way down the alleyways and negotiated all the pot holes like he could see, it did the trick and we got close to the ATM. He had to drop us off close to the main road as he said he would get in trouble with the police if he went any further . As we pulled over and got out the local boys on motorbikes were having a good giggle. Deb turned to them and said were we brave or stupid and made them laugh even more! 😂😂😂 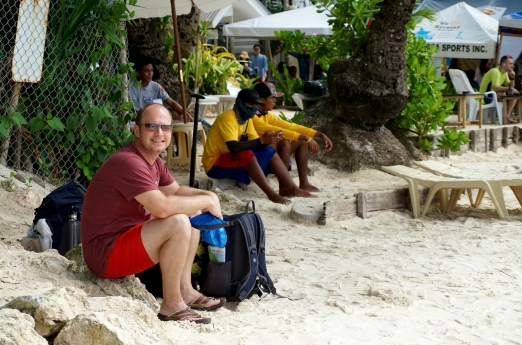 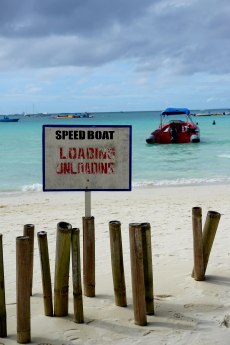 Out boat arrives at 12:00 and off we go.. It looked calm until you get in the open sea.. Turned out to be very wavy. Whilst Deb was enjoying being bounced around and zipping about, Steve really wasn’t so sure but the guy steering certainly new his stuff and negotiated the big swell well. 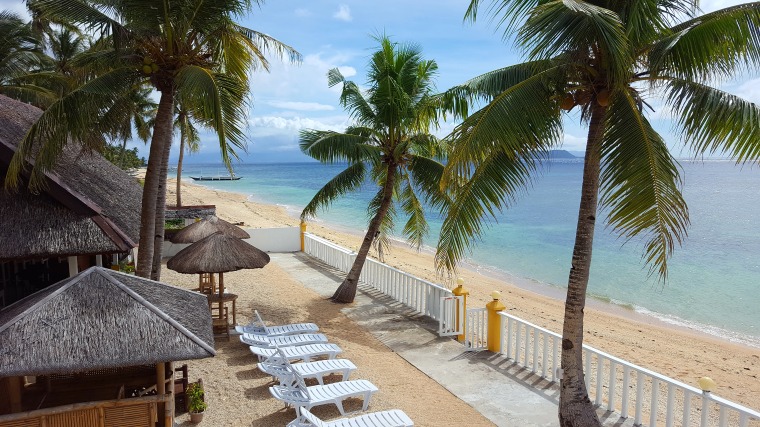 Within 25 minutes we arrive at Lana Beach and to our beach front apartment and an amazing view that looks just like a postcard! We sit and have a drink and a lovely lunch, prawn cocktails have never tasted so good that Deb decided to have the same for dinner but with the addition of rice. Meanwhile, Steve munches his way through Ronnies special Thai Curry and a beef stir fry. Before we know it it’s dark and we are into our third local beer and rum and coke….Well at £2.80 a round would be rude not to. 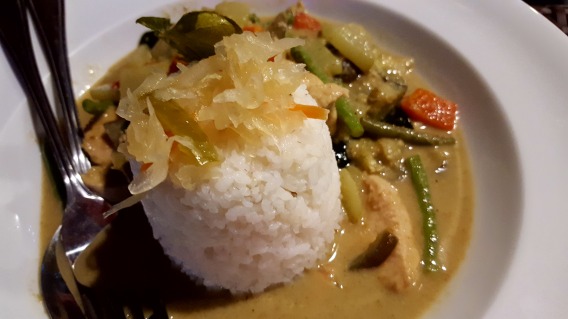 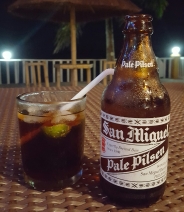 So what’s Carabao Island like? Some of the beaches are more coral than sand, much better for beachcombing and shell finding.. The sea is still as blue and clear and the corals are closer to the shore as the beach is not so shallow as Boracay. How many starfish were there, so many everywhere you look at a range of big to small and loads of colours. No product placement here, this was just as it was! 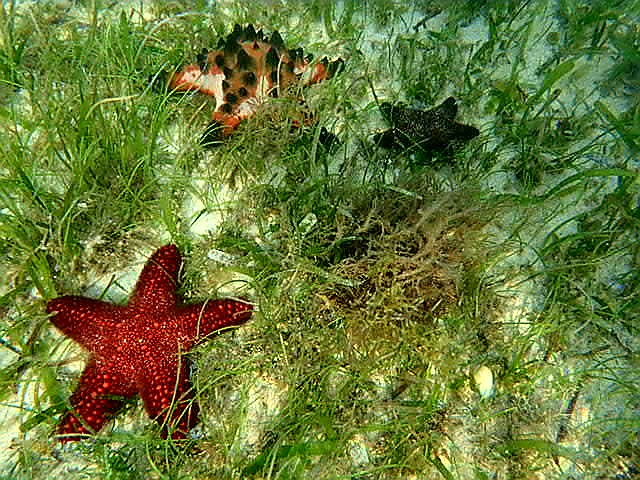 You can sit and watch the locals fishing from their small boats, go kayaking or snorkeling.We even saw the biggest pig on the beach being chased around as the guys try and load him on a boat to take him to market. 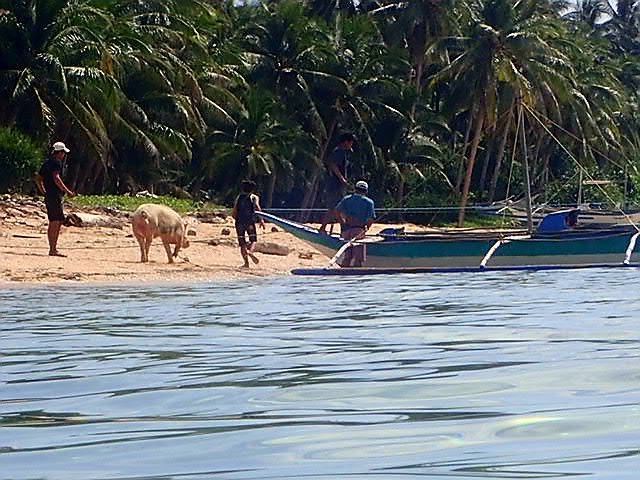 The main road is a small concrete path in some places and in others just a muddy track, you really are in the real Philippines. 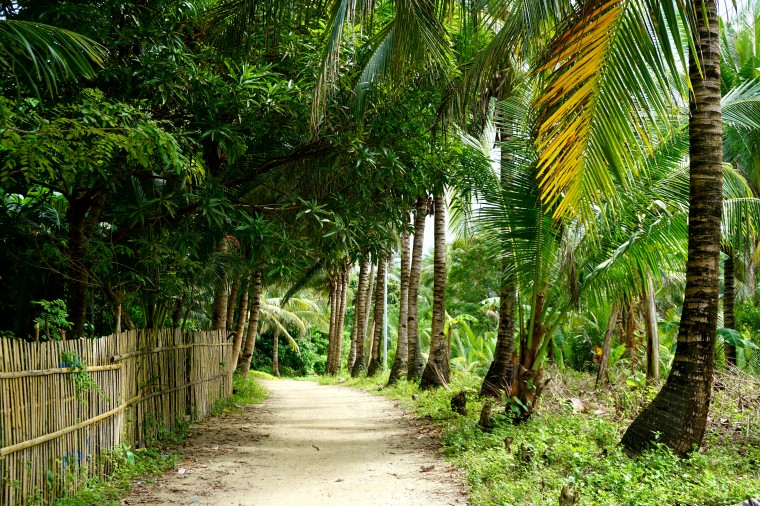 10 mins walk and you are in rice fields, all the locals seem to own one carabao, a few chickens, goat and pig or wild boar.  Although we didn’t do an island tour, you can arrange to buzz around on the back of a motorbike with a local and go to the main town San Jose. We just did a lot of chilling 😎😎😎, swimming and wandering. 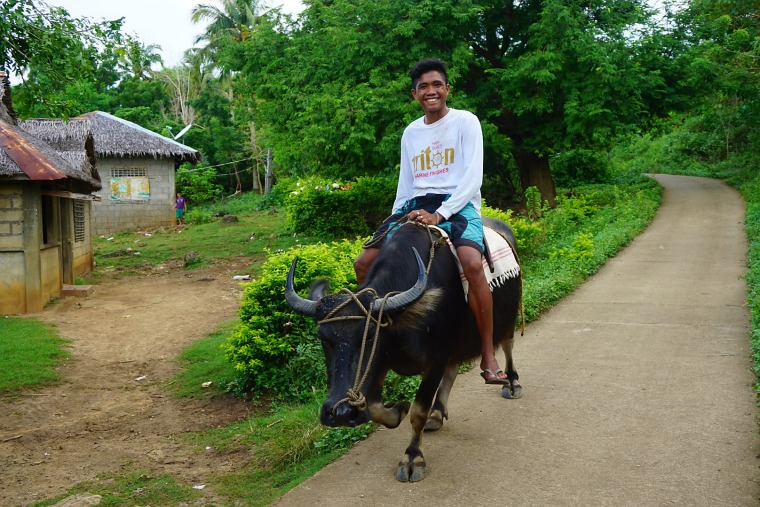 Everyone is so happy, they all say hello and the kids all wave at you.. It’s so lovely! We even got invited to join into the locals karaoke at their house. As Debs version of Tom Jones “My Delila” could burst the ear drums of anyone close by we thought it would be best not too.. 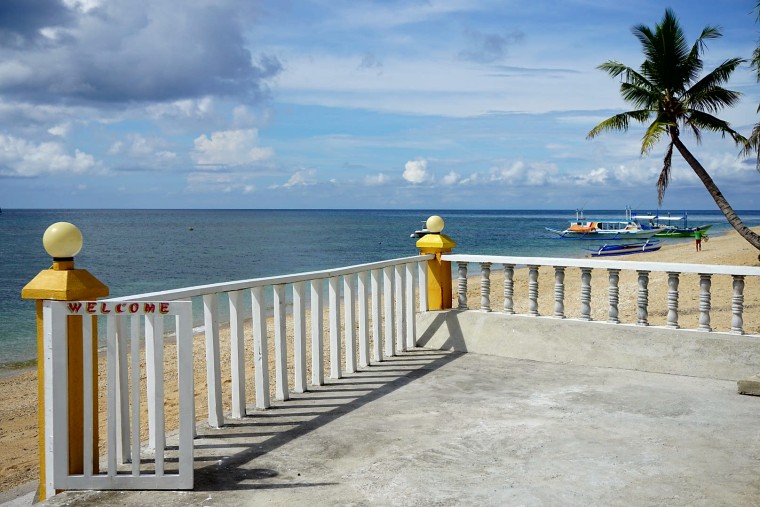 Strangely we come all the way over here from the UK to be staying on a little know Island and are met by Mark and Amanda from Brighton in the UK who run the hotel and Ronnie the German chef, the owner of the hotel is Norwegian, crazy hey?
The hotel is in a lovely setting, right on the beach front, the price is great (less than an average B&B in the UK) and the most amazing horizon for the sunset, just the place to chill and enjoy the natural local culture.

Off to the airport for another plane to Manila and meet our daughter to fly out to the next island Palawan. 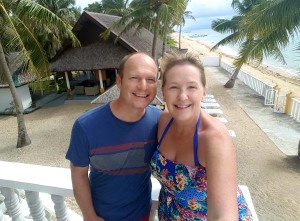