We choose to take a car and drive on route to Hue and make a day of it. You can get there various ways. 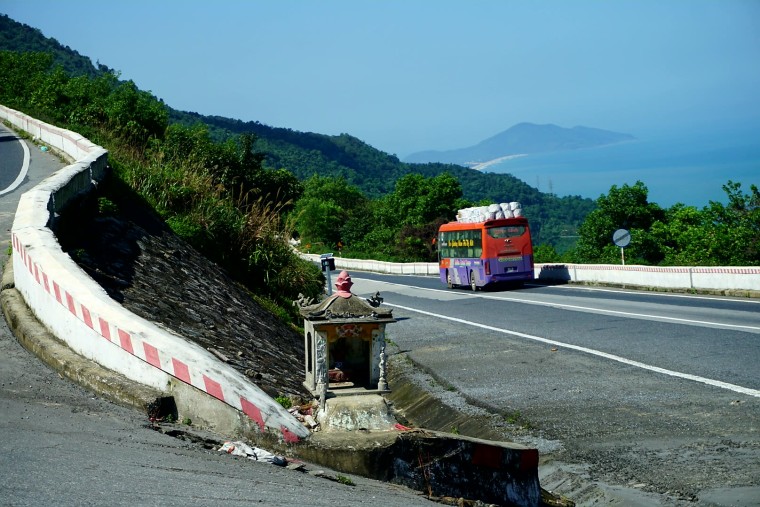 Train – Cheap and slow and you miss the views and stopping where you fancy.
Bus – Misses most of the beautiful pass and bay and to be frank,  we had them pass us along some of the route. They drive fast with no care, like they have a death wish. The poor motorbikes get pushed off the road into the dirt all the time and the bus will play with the traffic, not slowing down until you do to let them through. Then 5 mins later they are at the side of the road having broken down or over heated and all the passengers are sweating in the heat.
Motorbike – For the mentally insane westerner who wants the standard right of passage leg scar and knee injury. 😉

After you pass the mass development of jumbo sized new resort hotels being built on the beach front pretty much all the way from Hoi An to Danang the 1st stop is a place called Marble Mountains. It looks just like 5 pieces of rock poking out from the earth and not much to see but as soon as you get on them you see why people like them and also why during the Vietnam war they built a hospital in them. It was right next to the US army base hidden in plain site and never found! The views are great and you could spend half a day here easily, exploring the temples, tunnels and caves inside. We were so glad it wasn’t raining as you would really struggle to get about as the marble is slippy enough in the dry. 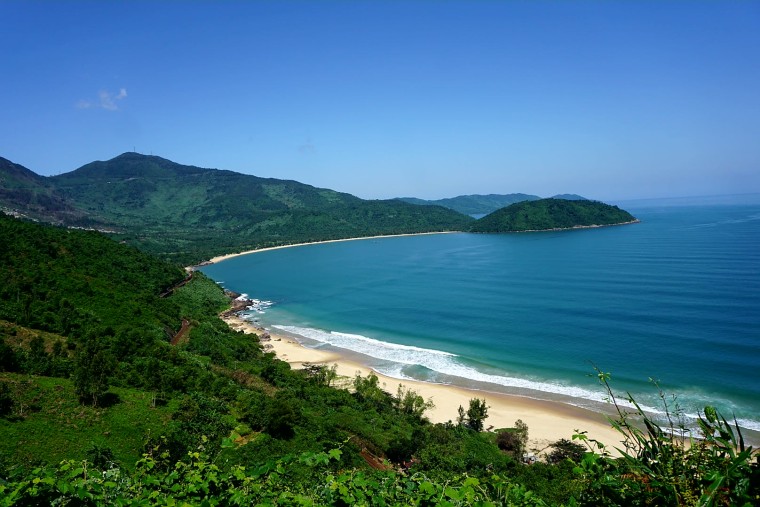 Then we took the slow road to Hue to be able to go through the Hải Vân Pass as seen on Top Gear. The views are lovely on the day we drove although it can be extremely foggy sometimes.

Final stop is Lang Co Bay, apparently one of the 30 best bays in the world?

We arrive at our hotel, Hue Villa Hotel which is part of a tourism training college teaching the young how to run hotels and part funded by Luxembourg. Rooms are big and it’s a cheap place to stay as long as you don’t eat there as the food was expensive.

We spend the evening watching the sunset over perfume river and the dragon boats shuffling tourists back and forth.

Next day we bake ourselves in the sun whilst looking around the imperial city. It’s currently being restored as it was, as you can most probably guess, bombed by the Americans in the war!

It’s an impressive place and the restored parts are beautiful. Deb finally runs out of memory cards which gives us a good opportunity to look through our photos and realise just how much we have seen and done and just how quickly it has gone by. Can’t believe we will be on our way home soon.
This starts the whole, what are we going to do conversations again and then on to what destinations we fancy next?

The sun is still shining so we book a car and driver for the afternoon for £15 and head off to the tomb of Khan Dinh. It’s a pretty stunning place but again, if you look at how poor the people were verses the tomb it’s pretty sad. It was know as the place you never return from when it was being built and so many died in it’s making. The imperial king also put the taxes of the village up by 30% just to pay for it! 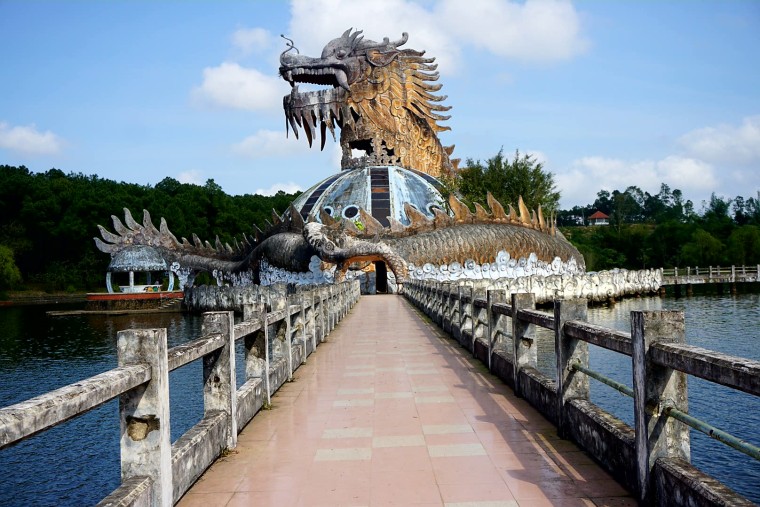 Then we are off to the abandoned water park down the road to pay a villager 70p who is making himself an extra bit of cash on the side to let you through the gate. This place was opened back in 2004 although not complete and closed in 2006, for a reason no one is quite sure of. Up until 2014 there were plans to turn it into an eco holiday park but this has since failed. The park is now just in decay and a cool place to visit since the crocodiles have been re-homed.

The scariest thing is that you can walk up to the top of the dragons head and look over the edge. Some have even climbed on to the top of the head. The place only has a few people wandering around. Mainly younger bloggers/vloggers trying to be super cool. No health and safety here, sure it won’t be long until some crazy vlogger or blogger falls off and then the access stairs will get smashed up to stop you going up. 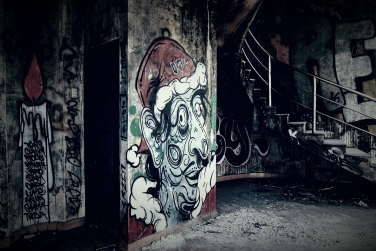 The night is spent on the riverbank watching the locals cooking up spurious bowls of stuff on stalls under a bridge and trying to sell some rather tatty souvenirs to the over dreamy tourists.

Then it’s off to have maybe the second best curry Deb has ever had at Shiva-Shakti Indian Restaurant complete with the locally brewed beer.

Over night the rain arrives and the power come and goes, just as well we are packing up and moving on to Bangkok to catch our flight over to Myanmar.

P.S. This is what happens when you have a Korean wanting to help take your photos and shows you how to pose! 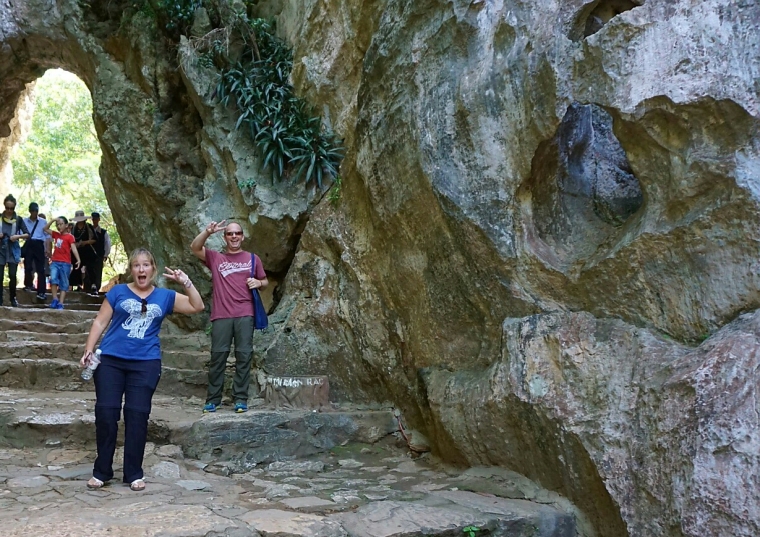 2 thoughts on “Hue and What to Do”